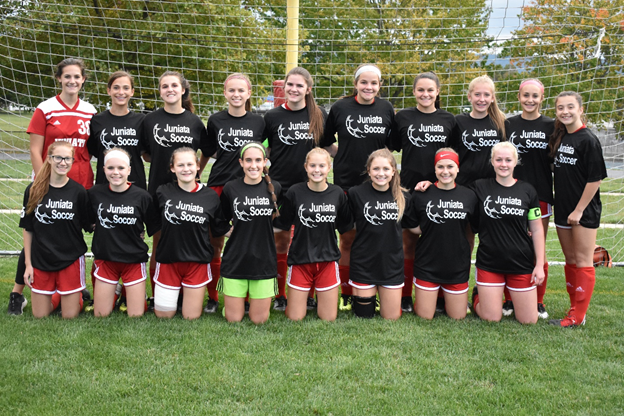 With the COVID-19 pandemic, the Juniata girls’ soccer team, along with all other fall sports teams, feared that there wouldn’t be a season. When PIAA announced that fall sports were a go, coaches Garrick and Laresa Paden quickly got the ball rolling for their young team. Consisting of mostly underclassmen, the team had just two seniors and three juniors. With a tough schedule, a young starting eleven, and only 18 girls total, the squad had to fight through their season and figure things out on the field.

Ending the season with a 5-8 record, the girls didn’t qualify for a district playoff seed, but that doesn’t mean the season was a bust. The young team consistently built upon their previous games. Many girls learned a new position and a few gained a better understanding of a position that they’ve played for years. In their final game, the team finally put the puzzle pieces of their season together. In this game, they beat Halifax 12-2, whom they had only beaten 2-1 earlier in the season.

The growth that occurred throughout the season can only be attributed to hard work and determination. This determination also earned a few girls honors in the league. Katey Martin was named First Team Midfielder for her hard work at the center defensive midfielder position, while Hailey Kepner racked up a total of 172 saves in league play to earn First Team Goalkeeper.

Next season, the girls will have to replace seniors Makenzi Beward and Katey Martin, who play center back and center defensive midfielder. Their talent and work ethic will be greatly missed on the field. Fortunately, since the team was so young this year, a majority of the starting eleven will be returning next fall. In the off season, the girls will look to improve in many aspects by lifting, playing futsal, conditioning, and getting together whenever possible.