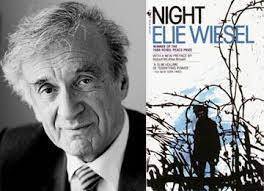 Have you ever wondered what many Jews experienced during the Holocaust of WWll? Have you pondered after the varieties of emotions they must have felt and the true extent of all that they lost? If so, the novella Night is the book for you.

The book is told from the perspective of its author Elie Wiesel, who was a Jewish prisoner in the Auschwitz and Buchenwald concentration camps during WWll. The book was a quick yet incredibly impactful read. I would give it a four star rating and would highly recommend reading it. It reveals the struggles that Wiesel endured at a very young age and depicts the plight of the Jewish people as a whole during this devastating period in history. The book reveals how poorly the Jews were treated by the Germans.

Wiesel describes how many Jews tried to escape and how many died before they ever saw freedom again. He painfully describes how friendships were made, how family was lost, and how so many people were left behind, but never truly forgotten by those who knew the true pain of the Holocaust. This is certainly a read-in-one-sit and forget-everything-else kind of book.