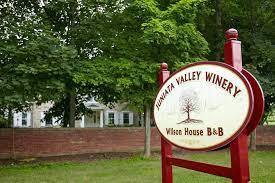 Who doesn’t love a steaming bowl of Chili? There is nothing better than warm beans and spices on a chilly Autumn day. On September 19th, the Juniata Valley Winery hosted a chili cooking contest to raise money for the Juniata and East Juniata High School Marching Band. With seven booths and seven different chilis to try, it is safe to say that there was chili for everyone there on Sunday. Some were spicy, and others were sweet; one chili even had chocolate in it! I talked to almost every chef and tasted six chilies. All I can say is I’m glad I wasn’t a judge because it was a close race.

At booth #1, Derrick and Kimbra Guyer cooked up a delicious southern sweet chili with corn. They came up with the recipe themselves and used rare pork instead of beef. When I tasted it, I thought I had bit into a sweet taco. You’ve heard people say that if you believe you can do something, you can. Well, this must be true because right before they took home the people’s choice trophy, Derick Guyer said to me, “We’re booth number one for a reason.” He was certainly confident in his cooking abilities. Either that, or he heard the guests raving about his and Kimbra’s dish.

We had an OG chili cooker present at booth #2, the winner of the last chili cooking contest. Lindsey Hendrix was no rookie, and that was clear as soon as I took the first bite. His chili had a thinner consistency, almost like soup. I have never tasted such fantastic chili in my entire life, though I am no chili connoisseur. He did not take home any prize this year, but that did make his chili any less delicious. I will also leave you with a bit of a warning; Hendrix’s tasty chili, delicious as it may be, is very spicy, and I recommend putting some cheese on top to numb the heat a bit.

At booth #3, Ronnie Brown had a very interesting chili. His daughter, Taylor, stated that it, “was the best chili he’s cooked in three years.” Brown’s chili was very chunky, and I can’t say I was a massive fan of the flavor. However, he made up for it with deliciously moist meat that melted in my mouth. I can’t wait to see what he pulls out for next year's cook-off.

Unfortunately, booth #4 had run out of chili when I went to taste it, so I can not say for myself whether it was a chili worth your time. However, if they ran out of chili, it must have been good. Paula and Berry Kepner had quite the setup at booth #4. Not only did Berry make chili, but Paula Kepner also made baked goods! Berry came up with quite the recipe; he used chocolate porter beer and a large bar of dark chocolate. He even grew the tomatoes used in his chili himself.

At booth #5, Route 333 Supplies LLC had Glenda Auker make a chili recipe handed down to her from previous generations. She used no fruit in her chili and no hot spices. The only way to describe booth #5’s chili is to say it tasted like fall. It was pretty sweet, instead of spicy like most chilis, and I certainly appreciated that after all of the other spices I had tasted.

Sometimes trying to follow your mother’s recipe doesn’t go well, but at booth #6, this was not the case for the Zimmerman Truck Repair chili. I was skeptical before trying it, but it was undoubtedly up-to-snuff. Though not the strongest flavor-wise, when paired with crackers to give it a little bit of a crunch, I loved it.

They say that the third time's the charm, but some people don’t need that many tries, just like our chili maker at booth #7. This was Brian Kinney’s first year participating in the event, and he took home the grand prize. Perhaps “beginner’s luck” would better represent Brian, but I don’t think luck had anything to do with it. His recipe includes 5 pounds of smoked chuck roast, cinnamon, garlic, brown sugar, and beans. I did not get to booth #7 until later in the day, and the chili was cold when I tried it. Due to the cooled temperature, the taste was not all that it could have been, but I wouldn’t call it bad by any means. Chili is meant to be eaten hot, so I wish I had been able to try this chili when it was warm. Oh well, there’s always next year and with his recent victory, I’m sure Brian will be back to uphold his title.

The well-loved, local band Belladonna kept the crowd entertained between chili tasting and wine sipping with upbeat covers that included “Hit the Road Jack” and “Love Shack”. Belladonna joined the Juniata and East Juniata marching band in playing some of their favorite stand tunes and field show for the crowd.

At the end of the day, it didn’t matter who won or lost because each booth donated their time and chili to support our school's young musicians. All of the band members are incredibly grateful to every chef, musician, and observer who came out to support them and their band. It was due to all of these generous donations and contributions that the event was so undoubtedly a success.