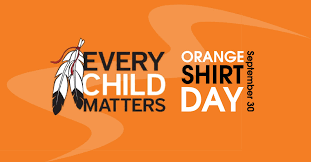 Orange Shirt Day, or National Day for Truth and Reconciliation, was originally a Canadian holiday, implemented as a means for education and commemoration of the Indian residential school system. The day, which was established by Phyllis Webstad, was first implemented in 2013 as part of the push for awareness of the atrocities that took place in residential schools.

For those of you who may not know, the residential school system (early 1800s-late 1900s), was a system implemented by both the United States and Canadian governments as a means to assimilate and develop the Native Americans into a proper, Eurocentric, “civilized” group of people. This system operated by separating native children from their families and placing them into residential schooling systems, where they were forced to learn operate and assimilate themselves into a white, Christian, Eurocentric way of life. This stopped native children from being in touch with their native roots, and forbade them from having any connection with their native cultures. These children were severely punished if they were caught speaking their native languages and practicing anything that connected them to their native tribes. Many accounts of former residential school students mention how they were oftentimes abused by the staff; physically, sexually, emotionally, and psychologically. This system in turn caused more damage than good, often being associated with causing a genocide on Native culture.

As a result of this heavy past, the Canadian government as of 2021 has elevated the day to a statutory holiday. The day is not only celebrated by people all across Canada, but the repentance has also bled into the United States, since we too are also guilty of the atrocities caused by the implementation of residential schools.

The color orange was picked as the staple for the holiday due to the accounts of Phyllis Jack Webstad, whose personal clothing—including a new orange shirt—was taken from her during her first day of residential schooling, and never returned. The color orange represents the involuntary assimilation those children were forced to go through. So by wearing orange on that day, you are in turn showing your support for the Native children and the pain they had to withstand. So on the next September 30th, wear orange to show your support against the hardships these children faced.