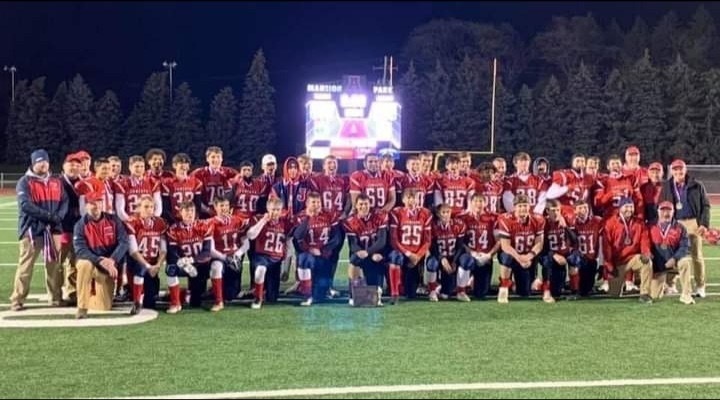 The Juniata football team has had a turbulent past 2 weeks to say the least. On Saturday November 6th, the team played Bellefonte for the District 6 championship. The game was at Mansion Park Stadium in Altoona, PA. The game began with a pretty close score at halftime, with the teams neck and neck. Juniata led at halftime, and when they came out for the third quarter Big Red ran up the score. They finished the game with a score of 41-12. The team won the District championship last year, so this year is a repeat. The team is very pleased with another district medal, but wanted more than just a District championship. The team looked forward to the next week against the inner city Pittsburgh University Prep. The game was again played at Mansion Park Stadium in Altoona. The game on November 13th started cold and snowy. Both defenses showed up to play, and it truly was a sight to see. Neither team let up any points in the 1st, 2nd, 3rd, or 4th quarter, and the teams went into the first overtime. Juniata scored a touchdown with a tricky play that involved two pass offs and a block from the starting quarterback, Jacob Condo. Seth Laub ran into the end zone untouched for the Juniata score. Juniata planned to kick a point, but after throwing University Prep offsides, they decided to go for two. Juniata got the two point conversion and celebrated with an 8-0 lead. University Prep now had the ball, in an attempt to tie the game and go into another overtime. University Prep was no match for the Juniata defense. The defense held them off yet again, and Juniata won the game 8-0. This state playoff game was the first in history that Juniata won. No other Juniata team made it past the first state playoff game. Now the team moves onto playing a very favored opponent- Meadville. The team plays Meadville on Meadville’s home turf this Saturday, November 20. The game will come down to whoever has the skill, the drive, and the heart to back it up.