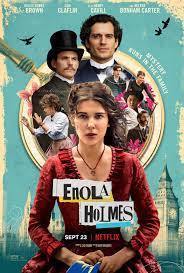 Millie Bobby Brown takes a bow as she finished starring in another well made movie, Enola Holmes.  Enola Holmes is a movie that follows the famous Sherlock Holmes’ kid sister -Enola Holmes- after her mom suddenly disappears after Enola’s sixteenth birthday. The film then follows the young heroine as she discovers underground female fighters while avoiding the scrutiny of her older brother.

Brown does an impeccable job with this role by giving it perfectly timed comic relief occasionally and breaking the fourth wall without it being annoying. Overall Brown creates a lovable character that teens can agree with, adding on to her previous high regarded reputation from her role in Stranger Things.